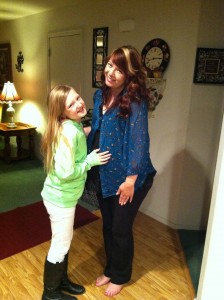 Like many women, I had babies in my late 20s — at a time in my life when I was more trusting, less discriminating and (regrettably) far more likely to be spoon fed my decisions.

Yes, I was educated — I had a few degrees under my belt by then — but I probably left it to the “experts” more than I’m proud to admit regarding the health and well being of my babies.

I believed what I was told, and when my doctors recommended vaccinations, I happily obeyed.

Fast forward a decade or so, and I found myself surprisingly pregnant at the age of almost-40. I had raised my two older children, and in the process, had learned a thing or two about that crazy thing called parenting. I also had become far more distrustful of what I was “told.” And I’ll admit, the fear mongering promoted by some facets of the media undoubtedly played a role in that.

So when my obstetrician told me I needed a flu shot — while pregnant — I immediately became suspicious.

Thanks to the media, Jenny McCarthy and her ilk, I heard the word “vaccination” and immediately thought of the worst: autism, brain damage, stunted growth and more. I wouldn’t consider myself a conspiracy theorist by any measure, but I guess a healthy dose of skepticism is an unwanted side effect of maturity.

I immediately went all “Mama Bear” protecting her unborn cub (thanks a million, silly hormones), and I set off to do some research. There was no way I was allowing anyone to inject anything into my incubator of a body without knowing the effect it would have on my growing baby.

But the evidence was overwhelming. Every peer-reviewed journal article I could find, every bit of sound scientific research, promoted the idea that a flu vaccine during pregnancy wasn’t just recommended — it was essential to keep my baby (and me) healthy.

We live in an age where information is available at the click of a mouse. It allowed me to see the truth, but it also opened my eyes to some of the tactics undertaken by far less scientific organizations promoting their own ideas. It turns out, the people who are anti-vax are also pretty darn good at search engine optimization.

But it’s fairly easy to discriminate between the experts and the pseudo-scientists. Sometimes, credentials aren’t enough — look beyond an “MD” or “PhD” and look for professional affiliations, peer-reviewed journal status and sources of expertise.

If you’re pregnant (or know someone who is) and flu vaccination comes up, please spend some time doing the research. And in the meantime, for a snapshot of just a few of the benefits and recommendations, here’s a start:

The other day, I was driving my older children — 15 and 12 — to school. My baby was in her car seat between them, and we were all listening to NPR.

Yeah, I know: I win Boring Mom of the Year.

Anyhow, the story was discussing flu vaccination in detail, including advice from Dr. William Schaffner, a professor of preventive medicine at Vanderbilt University Medical School. He emphasized that pregnant women ESPECIALLY should get the flu shot.

“The protection that the woman builds up passes through the placenta and goes into the newborn baby and helps protect that newborn baby during the first six months of its life when the baby is too young to be vaccinated itself,” he said. “And so there’s a double reason to vaccinate pregnant women.”

As I listened to these words, I thought to myself: For me, there’s triple reason — two teens and one baby, all healthy potentially because of that fateful decision to vaccinate while pregnant.

Mikalee Byerman is Director of Audience Engagement for the Estipona Group, a Reno-based communications agency, and is a freelance writer, editor and blogger. She also is mom to three happy, healthy children. Well, mostly happy — the picture above notwithstanding.